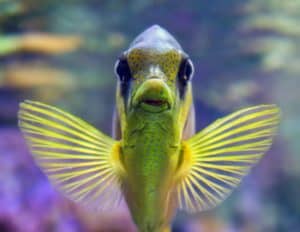 For those who are interested in saltwater aquariums one of the crucial aspects is choosing which fish to keep.  A saltwater or marine aquarium is one that holds an environment for fish that need saltwater to live in. The tropical fish known from ocean waters require such a habitat. One of the most popular species of tropical saltwater fish for aquariums is the Damselfish.

Many popular marine aquarium Damselfish species inhabit coral reefs out in nature. They generally get along with other individual fish belonging to the same species.  If several individuals are kept together, they actually move about in schools. They are a hardy species in the tank, adapting well to the presence of a filtration system and accommodating occasional sub-par water quality. The ease in taking care of them is part of why they are popular as aquarium fish.

In nature, Damselfish diet upon algae, plankton, and small crustaceans.  For those fish that live in aquariums, they may eat almost any fish food that you provide.  The various things that you can find would be fine particles of other fish, squid, or clams. You could feed them blood worms, brine shrimp or even flake fish food.

The Good and Bad

The Good aspects of choosing Damselfish for your saltwater aquarium are many. They are colorful species for the most part, and some even seem to take on a neon glow in blue-colored lighting. Even the black and white types are considered attractive. Their relatively small size also make them an appealing choice for aquariums. Their hardiness also is a benefit for the aquarium owner.

The downside in selecting Damselfish begins with the fact that many are highly territorial in their habitats. They do not like to share space with others, and will be aggressive and bullying toward other fish in their territory, even toward larger fish. They might also snack on some of the small crustaceans and tiny worms in some tanks, even though they are beneficial to the habitat.

All in all, Damselfish are probably the best choice to make if you are stepping into the realm of keeping a saltwater aquarium. An expert will help you make the best selections for your first marine aquarium.