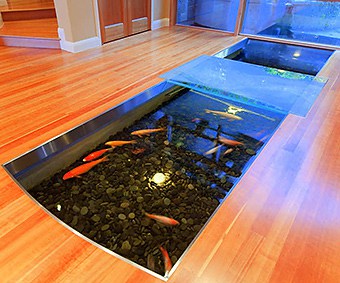 Anyone who has spent time near an aquarium knows the attraction of watching the fish move about in the water. Aquarium therapy begins by recognizing this attraction. The sinuous movements of the fish, the gentle flutter of the fins, these capture our attention in their graceful simplicity.

Aquarium Therapy for Home or Office

As it turns out, studies are beginning to show that this fascination can have therapeutic benefits to us. Nobody had thought to consider it until recently, but early studies indicate that having an aquarium around, particularly in a potentially stressful area like a medical waiting room, can help soothe the visitors.

Watching fish has been shown to reduce anxiety in waiting dental patients. Even watching a video of an aquarium can lower the pulse rate and muscular tension of elderly subjects. Other researchers have discovered that for those with Alzheimer’s, aquarium therapy with displays of bright colored fish can inspire improved eating habits and calm disruptive behavior.

Apparently, the size of the aquarium is not an issue in this benefit. A small aquarium can be as effective as a large one, so long as the fish has space to swim about in.

The possibility of coming home to such a soothing addition to the household can inspire even the most inexperienced-with-fish person to consider getting an aquarium. Smaller aquariums might be easier to maintain for such a beginner. There are aquarium maintenance and design experts who can help the novice in selecting the best one to suit experience, available time, and space. And if the prospective fish-owner chooses to go for a larger, saltwater system, and is concerned about maintenance, it is possible to hire maintenance services to help maintain the aquarium.

A home aquarium can become not only a lovely focal point for a home, but also a stress-reducer for the residents. Even as short a span as five minutes gazing at a populated aquarium can help soothe irritated spirits. For people recovering from serious surgery, the undemanding interaction with fish provides an up-beat element to their day, helping them have a more positive outlook during the crucial period. Hyper-active children have been found to gain focus while engaged with fish in an aquarium. All because of those fascinating finned creatures in water in the transparent container.

The benefits of an aquarium in the home are more than just beauty and pleasure. There’s a calming therapy for those who have to wrestle with daily jobs and bills. A tank of fish can be a worthwhile expenditure for the psychological benefits that can come with it. Find out today if you can fit one into your own living space.