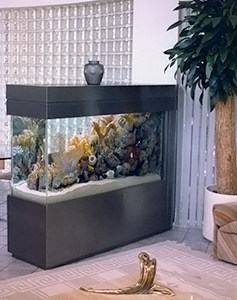 Freshwater aquariums are inexpensive and fun. If you’ve never had an aquarium before, you’ll have to learn a little about aquarium design, equipment, and maintenance. Once you’ve determined where to place your aquarium, you’ll have to stock it with sand or gravel, plants, and all the equipment needed to keep the water clean. It’s only then that you’ll come to the part that’s the most fun: choosing your aquarium fish.

Don’t worry if you’re not sure which fish to choose from the hundreds of species available at you local aquarium store. Fish for freshwater aquariums are very adaptable and easy to care for. Here’s a list of the Top 5 Fish for Freshwater Aquariums:

Guppies are the perfect fish to get your new aquarium off on the right foot. They are very hardy fish, so they’ll be likely to thrive when introduced to a new aquarium. They’re also a very peaceful fish. That’s an important consideration when you’re setting up freshwater aquariums for the first time. Beginners should avoid flashier-looking fish like Bettas because their aggressive nature makes them less than perfect neighbors for the other fish.

Guppies are easy to breed, so you can end up with a fully stocked aquarium by starting with just a few fish. The males are especially colorful with big, iridescent fins that shimmer as they swim by.

Tetras come in several species, but they’re all great fish for freshwater aquariums. They really stand out when you turn on your aquarium light because they’re so brightly colored and like to swim in a school. Tetras are timid, but they get along well with other community fish. Choose at least six to get the most vibrant display. Tetras like aquariums with  a lot of plants that they can hide in when they get nervous.

Cory Cats aren’t exactly beautiful, but they sure are fun to watch. They have a broad snout and feelers, and they love to spend their time rummaging around the tank’s bottom cleaning up scraps. That makes them ideal fish for first-time aquarium owners. They’re always active, making them fun to watch, and they get along with all the other common species you’ll find at the fish store.

Danios are similar in size and temperament to tetras. They feature bright colors in striking horizontal stripes, making it exciting to watch them swim past. Like tetras, they get along great with other fish. Buy a half-dozen Danios so they can swim in a school. Danios are often chosen as the first fish in a new aquarium because they’re so hardy. They’re not fussy about the type of flake food they eat, making it easy to keep them happy and healthy.

Plecos are like Cory Cats. They’re not beautiful, but they’re useful and fun to watch. Plecos are much larger than Cory Cats, but they have the same catfish snout and feelers. They love eating algae, so they’re great at keeping your aquarium clean. These fish attach themselves to the glass and scour it all day long. They’re very slow and peaceful, and get along with all the other fish in your aquarium.

If you want to make it easier to care for your fish, ask your aquarium store to help you select fish that get along with others and prefer the same type of fish food. That will cut down on the amount of time you spend with chores, and increase the amount of time you spend enjoying the endless parade of colorful fish as they swim by. You’ll also find that it’s better to introduce each species separately so they can become acclimated to the new aquarium before a new type of fish appears.